Zero to One: The Books Founders Should Read 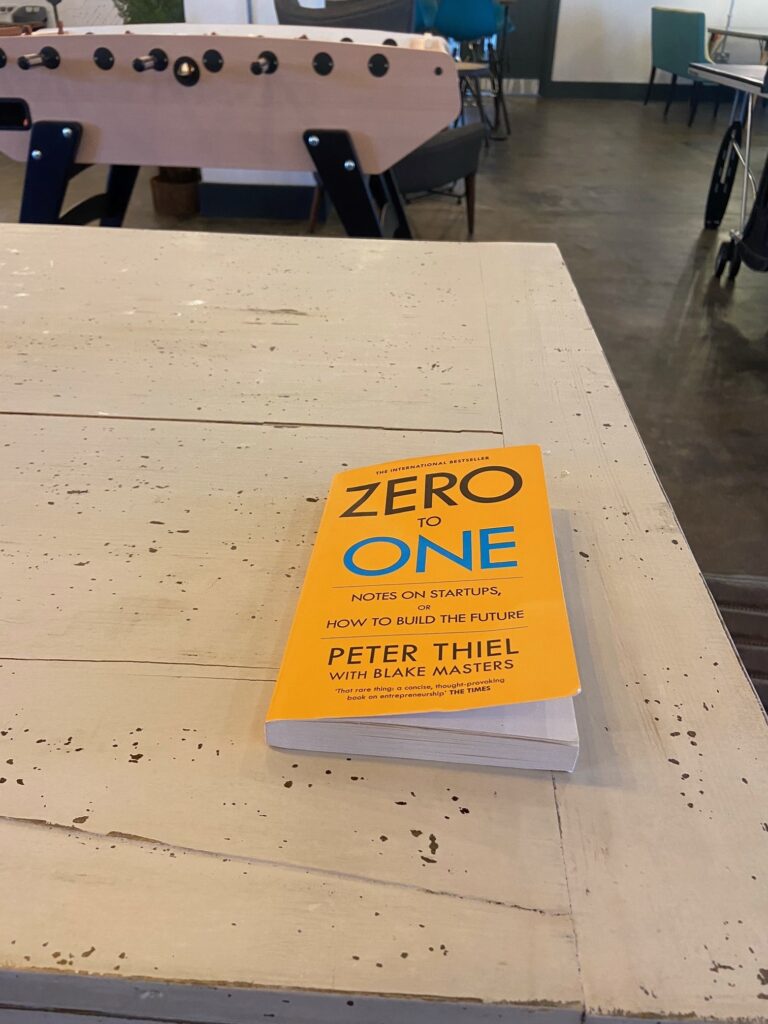 In the first of our startup and scaleup book series, a series that focusses on books aimed at Start Up and Scale Up businesses, James Adams will be reviewing Peter Thiel’s Zero to One.

A quick note on Thiel…

The first thing to say to review on this book is really to talk about the author. Whilst it isn’t covered by the book, a little background goes a long way as a preface for the whole piece. Peter Thiel has been there and he has done it. Co-Founder of PayPal, leading the first outside investment in Facebook through Founders Fund (which, incidentally Thiel set up alongside some PayPal notables) and has notable mentions in the journey of some other companies you may have heard of including Airbnb, stripe, Spotify – and what would ultimately become SpaceX.

It’s quite some list and whilst never paraded over dramatically, more subtly nuanced throughout the book. This is the level of operation Thiel works at.

Zero to one assumes that the reader has a certain level of understanding of a wide range of socio-economic views, events and situations. It certainly leans into a lot of economic theory very early on and continues that approach throughout. That’s not to say that the book isn’t accessible, but I studied politics and economics for five years (A-Level and Undergrad) and whilst this really drew me in, I can understand why others may find it, at times, lumpy reading.

The premise of Zero to One

Thiels book takes the user on a journey of the ultimate start-up. In this world, monopolistic value creating juggernauts exert dominants over marketplaces so large, they create billion-dollar revenues. Let alone valuations. I’ve managed to mention without emphasising two key elements here. Thiel links the entire premise of zero to one on value creation that is so stark, so overtly better than its competition, it can, and should become a monopoly. As with everything in the book, this isn’t a throwaway statement. It is carefully constructed and traced back to a core principle. In this example, value creation against the competition can be quantified as being 10X better than your nearest rival. It’s a concept that I truly believe in.

An easy premise to love

As advisor to Readingmate, an app that supports children to learn how to develop their reading skills, we implement this 10X approach in our book recommendation engine. Of the Amazon top 100 selling books for children the reading age is on average 2.5 years gap (theoretically stating a recommended reading age of 4 – 6.5, although more likely 4 – 6). Our algorithm not only ranks books using real teachers’ inputs and individual reading age tracking, we recommend the right book for the child based on their current situation and our books are graded to a .2 reading age. From a parent’s point of view, you can easily and significantly see the value of recommending a child’s next book based on their current level, but also matching it to a much tighter boundary. The value is, in ours and the minds of the thousands upon thousands of users who log on daily to log their child’s reading journey every single day, clear.

Thiel argues, with varying degrees of acceptance on my part, that anything below a clear 10X differentiation, puts you in a competitive market. It is being in those such markets that stifles innovation as the companies within them aren’t cash generative enough to truly focus on sustained innovation. Thiel continues to define markets at such scale that the caliber of “needle moving” company he is talking about is never in doubt. However, where most entrepreneurs play, we can define monopolies of a much smaller base. Striving for 10X should be a goal, but we don’t have to 10X on every front, for every substitute or tangential market, as Thiel, for the right reasons in the narrative of the book, presses multiple times.

At a younger point in my career, a mentor of mine of both engineering and marketing persuasion would readdress the qualities of an innovative company. To truly innovate, he would motivationally declare, a business must be innovative in at least three or more areas. Areas such as engineering, marketing, sales, operations, finance etc. should all be ploughing their own furrows on innovation, to elevate the one or two percentage points required to yield differentiation. Thiel, and I in somewhat of agreement today, would suggest this is not the way to be an innovative company. The competency of many companies, especially in the start-up and scale-up space is to deliver this 10X value in the product. Apple may be 10X better at marketing, distribution, and engineering than most, but they’ve built a steady base to deliver it. When Jeff Bezos started Amazon.com he wasn’t focused on innovating anything more than having the largest selection of books available (albeit his distribution method at the time, could be argued to be a tangential innovative area).

Thiel would argue that multiple, micro “innovations” are trying to achieve a 10X differentiator that doesn’t exist. Something that companies that aren’t in a monopolistic position, are always trying to deliver. It’s their way creating noise to justify or create the perception of value.

Innovation may not be the focus, but competency full stop is non-negotiable. Thiel consistently refers to and places huge stock in general competency. Thiel is constantly seeking to peel away the ping pong tables, and bean bags made popular in many spaces due to the Silicon Valley trends started in the 90’s and ensure there is competency running below the surface. In fact, one such competency that falls just behind his 10X differentiation approach, is that of distribution. Thiel makes great reference to the fact that whilst we are easily romanticized into thinking that great products sell themselves, this is a major fallacy. Great salespeople, ones that Thiel argues are so good at selling you would never know they were, are as important as any other competency within any start up or scale up company. Ignoring such competencies is to flirt with and accept failure.

Would I recommend this book?

Quite simply. Yes. Whilst I have had to gloss over and pull forward the critical elements of what I think makes this book so important. I have done so in a way that we must frame most business books. With the view of relevance to the majority. I started this piece by talking about Thiel and his background, and to reiterate that. Thiel has been there and done it with some of the best businesses in existence today. True global shifting multi-billion-dollar behemoths. The journey you will go on through this book is exciting, its intellectually stimulating, but at times, it seems ethereal and other worldly. It will make you dream; it will instil great concepts that can be adapted and used in your start-up or scale up today but there are some elements that should be viewed as what they are. Great stories from some of the most prominent businesses in existence. That insight may not be replicable, but it’s a great insight into the mindset and experiences they went through. If you haven’t read zero to one, set aside a week because once you pick it up and start to get interested, it’s a book you cannot put down.